From the Liffey to Shannon Harbour

Something I've wanted to do for such a long time was to travel the Grand Canal for its entire length. This August I did just that. I used my trusty little motorbike a Yamaha TW125. I brought camping gear and the maps I downloaded from http://www.iwai.ie/ . As a kid I swam in the canal mostly at
the 8th lock and later in my teens would walk as far as the lakes just past the 12th lock fishing.

The Irish Waterways website and Wikipedia fed my curiosity about the canals origins and it's history. My knowledge of the canal was limited, things like the lakes between the 12th and 13th locks are the result of quarring. The canal builders used the stone to build the locks themselves,

there are rectangular ponds at the 8th lock that can be seen from the M50 near that odd spire.
As a kid I was told that they were fish farms, in fact Guinness used them as filter beds and
Dublin Corporation were also glad to use the crystal clear soft water of the canal.

I started my little adventure at the Grand Canal Dock Ringsend ,where the canal meets the river Liffey. Then I followed the roads to Grand Canal st,Clanwilliam pl, Warrington pl,Percy pl,Mespil road then along the South Circular rd to Blackhorse Inchicore. Here I hit the actual canal bank at the 5th lock. I knew I would meet some obsticles as the Corpo put barriers to stop horses cars and

people like me using the toepaths. I only went a few hundred yards before I met my first on the south side so I returned to the 5th and headed up the north side. At the 7th lock it was impassable, I went back to the 6th and crossed over a narrow metal footbridge. I could not get from the 7th to the 8th as a crew of workers were busy building another of those barriers so I hit the Nangor road to the 8th, again the barriers were designed for pedestrian access only.So it was back on the road to the 9th lock. From here I could make my way to the 12th lock with ease passing the ruins of an old stone lockhouse.
The stretch from the 12th through the quarries at Gollierstown was also blocked by a steel gate.

I could have just about man-handled the bike around this obsticle with the help of someone as mad as myself but the only person I met was a nervous cyclist who could bearly raise a humllo. Back on the roads again I headed for Hazelhatch were I could meet the next toepath. The going was easy from here as a road follows the canals edge, I drove into Ardclough looking for the grave of Arthur Guinness but realised I should have left the canal at Henry bridge so I returned to continue my trek and find Arthurs resting place another day. At Sallins the canal enters a deep cut and is shaded by trees. There is somthing errie about this stretch. I got into a real mess here as I tried to negotiate the barrier on the toepath. A passing motorist noticed me and came to my rescue.

Just after Sallins
I crossed the Leinster Aquaduct. 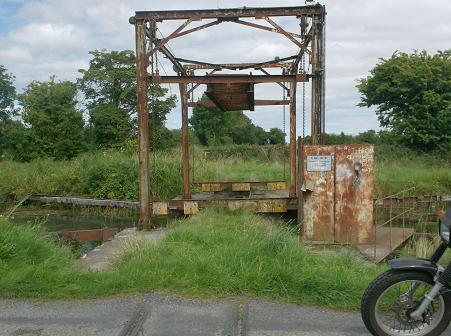 The Bog of Allen

I found myself back on the road between the 17th and 18th locks near Prosperous.
The toepath meets a stretch of road near Robertstown, a picturesque village but no petrol so I was given directions to Allenwood. I rejoined the canal at Bond bridge but could not get through the barrier at Shee bridge.I had to return to allenwood and use the roads again just to get to other side of the barrier at shee bridge.
The next stretch has the first of the board na mona bridges that cross the canal. This bridge is a frame of steel that lifts a section of narrow gauge rail track with counter weights, cabels and an electric motor,ugly but practacle.

The next part to the Edenderry is verry green, the toepaths are grass and this long straight section is broken only by the Blundell Aquaduct. At the Edenderry branch there is a metal fence with a turnstyle so again i had to return to the roads. I went back to the aquaduct to get off the canal and drove into town to find the Edenderry branch. The next stretch is also very green and remote. Here I came across the next Board namona bridge, I had just crossed over and tried to take a picture when a guy drove across and lifted the bridge. I took a break along the next part as it seemed remote.
I lit a small fire,boilled water and made a mug of coffee.

I knew it would be pointless to make Shannon harbour in one go as it would be dark,late and I was a bit saddle sore.
I was egar to make progress and the sceanery is hard to look at whe your driving a biike so I trundled along over grass
and gravel toepaths, the Killbeggan branch was the only memorable thing ecept the bank near Tullamore is plesant as
the trees are set back from the canals edge and a lot of people walk threr dogs. I had a quick look around the town and
had a study of my maps before moveing on. There are two ruined castles to keep an eye out for along the next stretch. At the first bend in the canal I came across a young man trying to start a chainsaw. I was worried as there were no trees to be seen he was smiling broadly which was not as comforting as you think.
Howya Ive just fallen in there he explained. he was cycling along the bank with his chainsaw across the handlebars when a pothole got better of him.

At Pollagh I drove along a gravel toepath for a bit. It was rough and in the shade while the far side was green and in the sun. Tired of treking I went to the pub, Gallagher's. Had a couple of pints. A local who lived in a house on the canal was very interested in the maps I downloaded. We had a laugh at the photos on the wall as the original owner was a dead ringer for Rory Gallagher. Before it got dark I headed up the green bank until Pollagh was out os site and set up camp. Supper was a fry and I collected a small mountain of firewood. The night sky was full of stars and there was no wind which meant I could hear every odd noise. I only slept for a few hours. All night I could get the smell of burning turf and first light I began packing up. It was then I realised my camp fire had been burning all night as ground,turf,was smoldering . 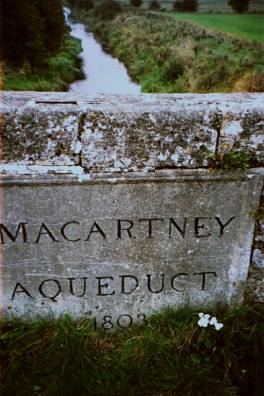 Earley morning dash to the Shannon

The morning was a little cold and toepaths were very rough, both the grass and gravel had deep furrows and potholes. I saw the last of the Board na Mona bridges, this one is a swing bridge. Views of the Slieve Bloom mountains were less important than keeping upright so when I got to the Macartney aquaduct I stopped for another map check. The next stretch is fairly good and there are a few houses near the bridges but at Glyn bridge
I just couldn't get through. Back on the road again to get to Belmont and from here on to L'Estrange now I passed more and more boats, crusiers and barges. 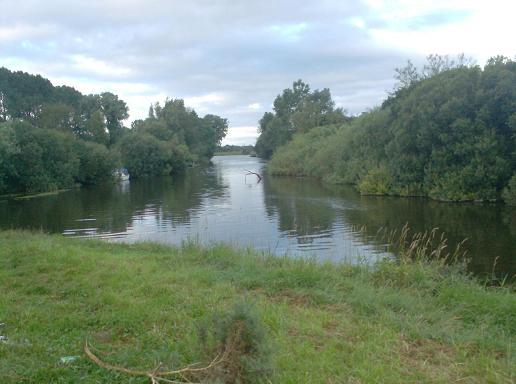 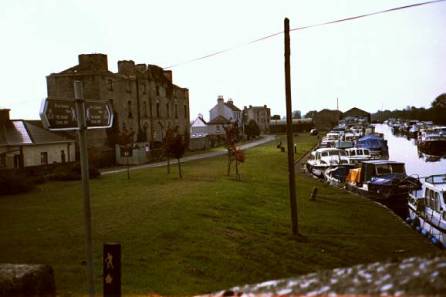 I drove into the village then through the boat yard and back around to the 35th lock, then the 36th and on to the best part. The river Shannon the Brosna and the Grand Canal meet here. I was happy that I actualy did somthing I've always wanted to do. Now it was 8 a.m. and I was low on petrol and miles from home. There wasn't any other person in Shannon Harbour that I could see but I'm sure they were sleeping. I drove to Bannagher, it was closed. Went to Birr and got petrol and a breakfast roll. I planned a route home avoiding the M7 as the bike is only a 125cc. I was home for lunch, tired from a poor nights sleep, frasseled from the drive across the country but elaeted with a sense of achievement.