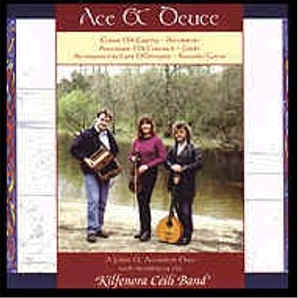 An energetic duet from the Kilfenora Ceili Band

6 PIPE ON THE HOB/HAG WITH THE MONEY

8 AN RAIBH TÚ AG AN GCARRAIG

15 THE TIPPERARY FANCY/FAREWELL TO EIREANN

Conor McCarthy comes from Ennis in County Clare, coming from a long line of traditional musicians. Conor played with the present Kilfenora Band and recorded with the band on 'The Kilfenora Ceili Band',''Set on Stone'  and 'Live in Lisdoon' and was the accordion player with the band for the three-in-a-row all-Irelands '93 '94 and '95.  Conor also recorded 'Late in the night' with Christy Barry' and recorded on his fathers CD 'Solo Run' and  has since joined the "Star of Munster Ceili Band".   Conor learnt his music from his father, well known box player Johnny McCarthy.

Cyril O'Donoghue Cyril originally comes from Ennis, Co. Clare but now resides in Shannon. Cyril plays Guitar & Bouzouki on the CD. Cyril's background is also steeped in traditional music with both his father and his brother also being well respected musicians in the Clare area. Cyril presently plays with Fisher Street.

All Prices Include P&P