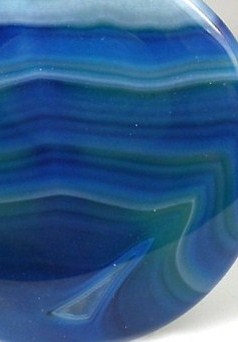 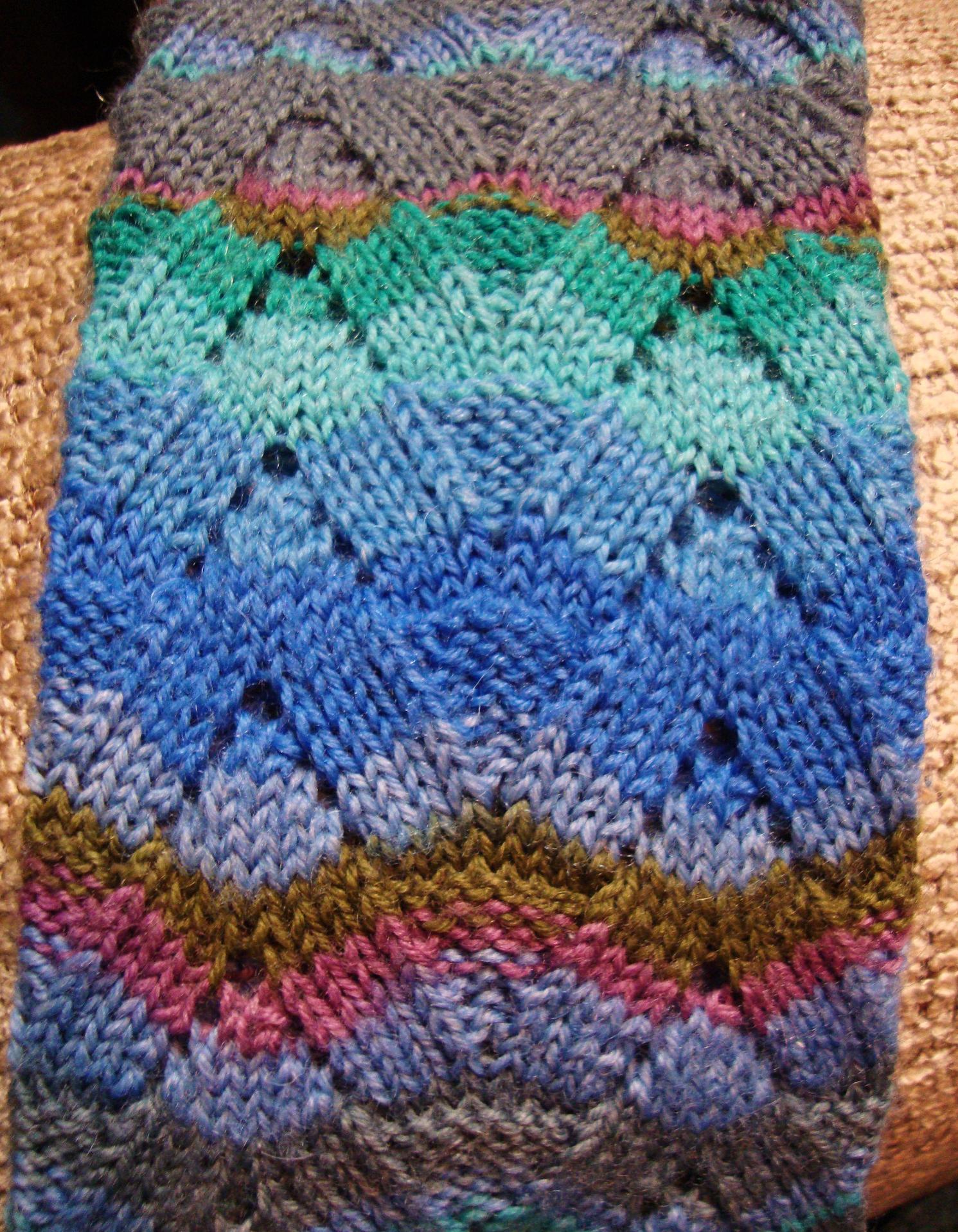 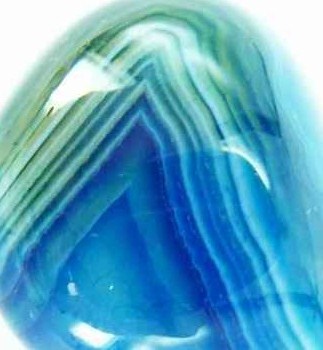 
These socks were designed in November 2007 with the help of Barbara G. Walker's wonderful book of knitting patterns.
I chose the lacy "Double Wing, Openwork Version" which is worked on a multiple of 16 sts. There are 4 pattern repeats
around the ankle.  They are knit in the round.  I liked the way the pattern caused the stripes to ripple gently, while the
"wings" looked intricate, but were quite easy.

The Regia 4-ply sock yarn (75% wool, 25% nylon) is one of my favorites. The colors reminded me of striped blue agate, or petrified wood.
It has held up wonderfully to 3 years of frequent use & washing on the wool cycle in the machine.

When I reviewed my notes & wrote out this pattern for my socks, (Oct. 2010),
I realized that they are almost the same (except for minor details) as Cookie A.'s Monkey Socks.
http://www.knitty.com/ISSUEwinter06/PATTmonkey.html
I was surprised & encouraged to see that I was on the same wavelength as someone as creative as Cookie A.!

I wrote out my pattern notes here, but refer to Cookie A.'s pattern if you need more details or find mine confusing.

I did a crochet edging on the top of the sock, after they were finished, and omitted the ribbing at the start.
(I just started in with the lacy Double Wing pattern after casting on 64 sts.)

Lace Pattern:
"Double-Wing, Openwork Version" from A Treasury of Knitting Patterns by Barbara G. Walker,
p. 142, modified for knitting in the round.

Repeat Rounds 1 thru 10 for the pattern.

(Cookie's version has an extra 11th round of "K all sts" but Barbara Walker's doesn't.)

Divide the stitches in half and arrange them so that 2 pattern repeats (32 sts) are evenly placed on each side.
Place 32 sts on a holder.

The Heel flap will be worked back and forth on 2 needles on the other 32-stitch section.

Turn and knit across, slipping the last (unused st). - This is how I handle things if the decreases
don't come out evenly and I have an spare heel flap st on each end.

I may have made this over-complicated, but it's how I always do my socks.  Cookie's way will work just fine too.

I continued to work the Double Wing patt on needle 2, but even stockinette st on needles 1 and 3.

I started the toe shaping after I had a total of 15 Double Wing patt repeats, from the cast-on edge.
I wear a USA shoe size of 8, so you may want to start your toe sooner than mine.

Then work decreases on every round (skipping the round of even knitting) until you have a total of 20 sts.
Knit across the 5 sts on needle 1. You will have 2 needles, each with 10 sts.

Graft the toe with kitchener stitch. 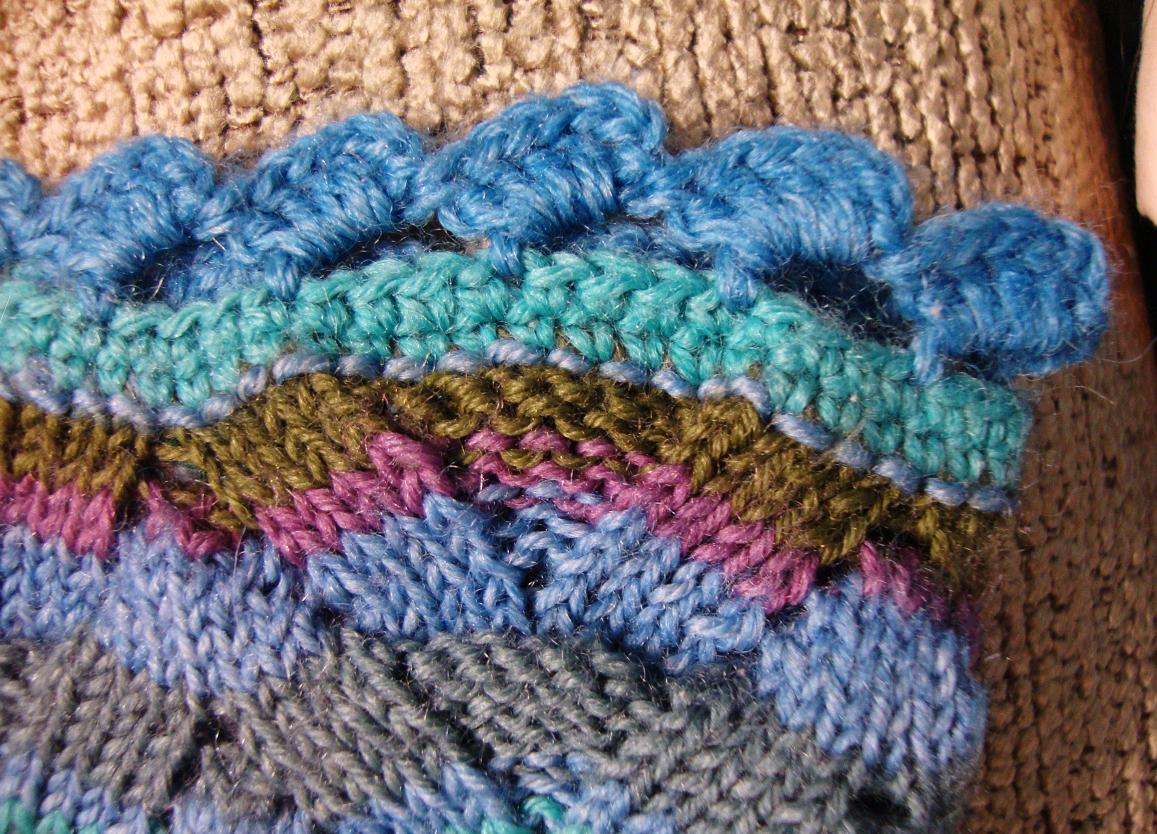 CROCHET EDGING ON THE TOP OF SOCK:

This is from a "mini-edition" booklet excerpted from "Crochet Edgings & Trims" by Susan Smith.
(It came free with an issue of Knit Today magazine, a UK publication).

Hook size = probably 2.5mm or as desired.. - Whatever "feels right".
Make sure the edge is not too tight and has some "give" in it.